Josh Da Silva, a West Ham target according to the guardian, was sent off during Brentford’s Carabao Cup clash with Tottenham for a terrible tackle on Pierre-Emile Hojbjerg.

The Hammers are controlling Da Silva, according to the Guardian report, although it is unclear if they had any plans to make their move for the Brentford man this month.

If they did, they may speed them up with an official offer after seeing the state in which he left Pierre-Emile Hojbjerg’s shin. 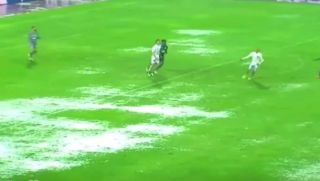 West Ham and Tottenham are, of course, old rivals, and Da Silva seems interested in impressing David Moyes and company, though not with his refined tackling ability.

Take a look at how he recklessly launched himself while challenging Hojbjerg. Only he knows if there was any intention, but it was an absolute surprise, and the Tottenham midfielder was furious.

Mike Dean stepped up to the VAR monitor and brandished the red card. It’s safe to say that you were left with no other option in this case.