Discover the history of the adidas f50, one of the German brand’s most famous shoes since its launch in 2004.

There are models that remain in collective memories because they have marked one or more generations. In the list of these models, we find the iconic Predator from adidas, the legendary King from Puma but also more recent models like the Mercurial from Nike, the Nike Tiempo or the adidas f50. Launched some time before Euro 2004, this silo intended to embody the notion of speed has attracted many professional and amateur footballers throughout its history and until its replacement by the X range in 2016. In 12 years, the f50 forged a legendary destiny by becoming the protégé of the man who embodies adidas today: Lionel Messi. It is indeed with the f50 that the brilliant Argentinian has become the best player on the planet. Imagine even for a second if Messi ever found the f50 …

Which players have worn the adidas f50?

Players who have worn the adidas f50:
. 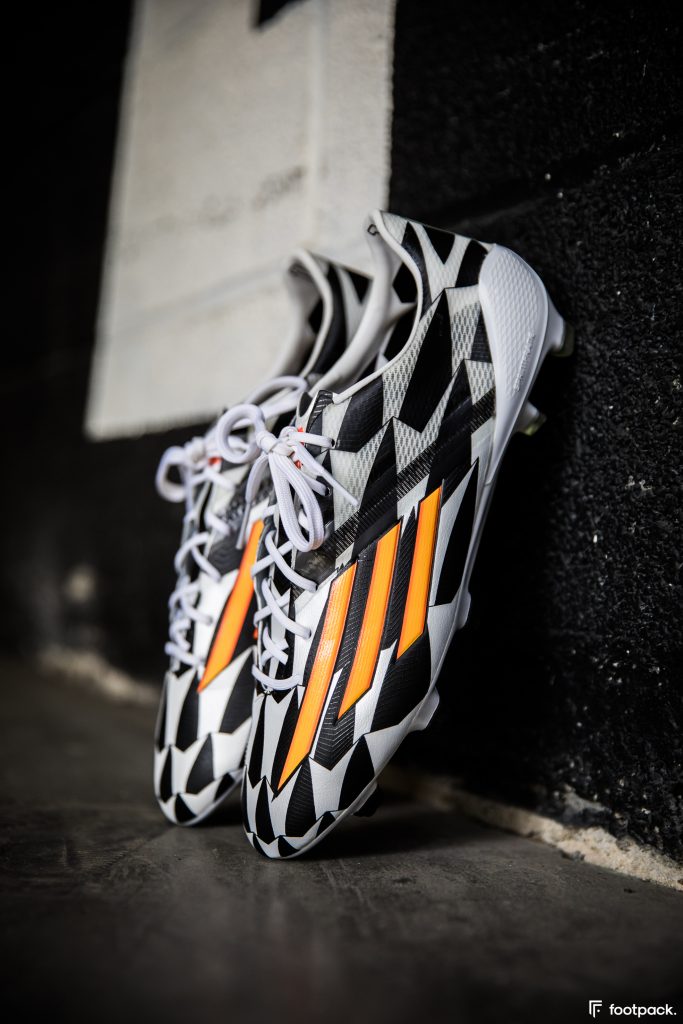 The history and evolution of the adidas f50 since 2004

It was in 2004 that adidas unveiled the new f50 silo on the eve of the Euro. At the time, the shoe consisted of kangaroo leather with a synthetic heel. There is a cover on the laces to enlarge the striking surface. Already cut for speed and sporting a silhouette much more aggressive than what we could know before, the f50 is unveiled and the story of this legendary pair launched.

The f50+ is one of f50 the most legendary of the series. Launched only a year after the presentation of the first generation, the design of the f50 + is inspired by a spider’s web and this motif remains iconic to many footballers today. A pattern that can be found on the entire rear part of the shoe while the cover on the laces is present to accentuate the striking force. This model also owes its fame to one of its owners: Santiago Muñez, the Real Madrid player in the film Goal 2. If the black and white color is well known, the blue and black color remains a priori the most iconic. 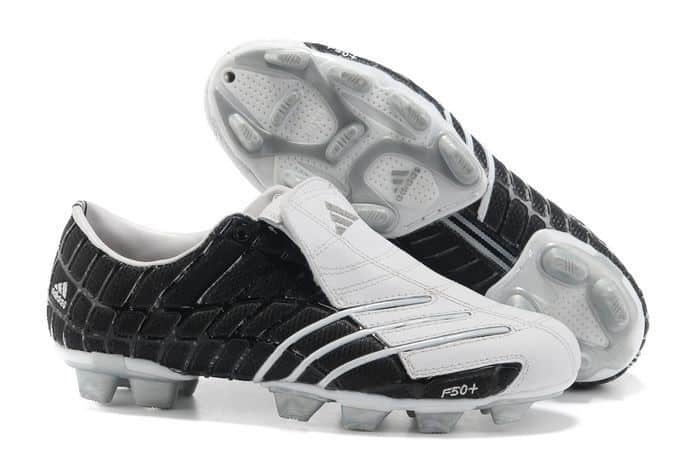 A year later, the +f50.6 marks the entry into the era of customizable shoes. Indeed, with this model launched a few weeks before the 2006 World Cup which took place in Germany, you could interchange your crampons according to the surface of the ground since it consisted of a frame, a sole and crampons. completely modular. Wishing to strike very hard on the occasion of the World Cup which was disputed on its land, the brand with the three bands had imagined a concept at least original since for each of the 32 nations participating in the competition, the brand with the three bands had presented a shoe personalized limited edition! 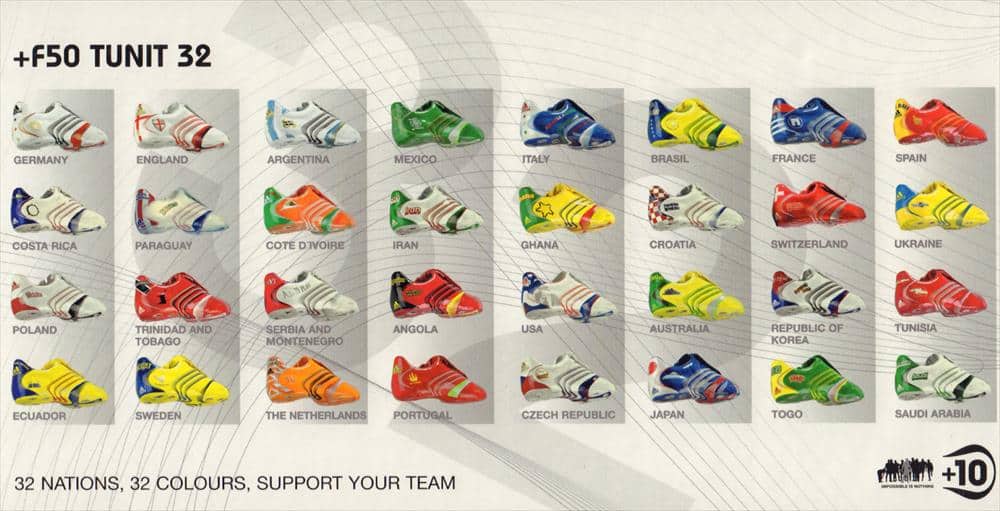 In the years following the launch of the + f50.6 Tunit, adidas has not changed its niche. Indeed, during the launch of the f50.8 then the f50.0, the concept of interchangeable studs remains and we bring a novelty with a transparent part that lets see the sock. In version f50.9, adidas even unveils a new layout for the stripes on the front of the shoe. This model is also the occasion to see Lionel Messi’s first signature shoe. 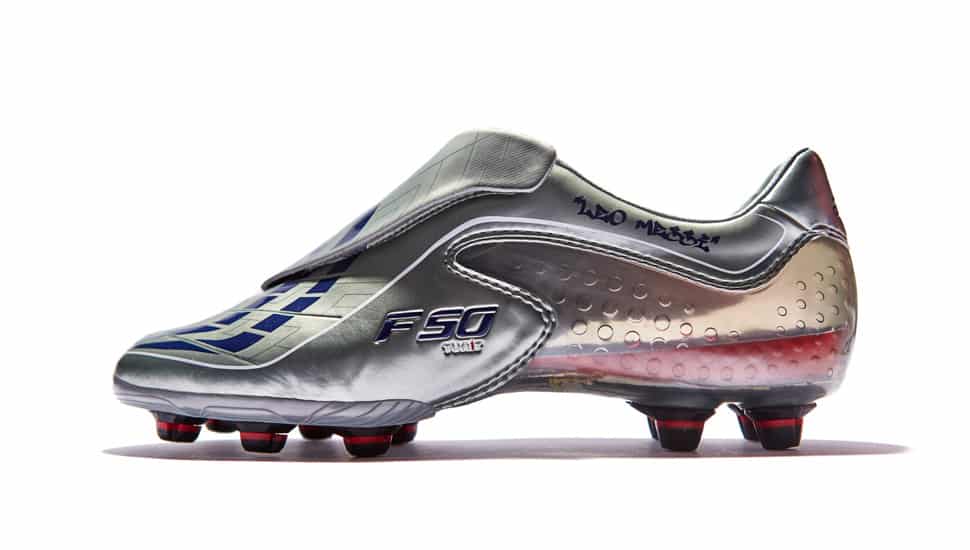 It was in 2009 and with the presentation of the f50.I that we saw the real desire ofadidas to make this shoe a pair for fast players. With a very thin upper, the brand considerably reduces the weight of the shoe, an element that will become a considerable selling point. To top it off, adidas got unimaginable exposure and spotlight just weeks after launch. Indeed, during the final of the Champions League 2009 between FC Barcelona and Manchester United, Lionel Messi, header, loses his shoe and celebrates his goal with the latter in his hand. The f50.I goes down in posterity and the image is forever frozen.

Six years after the first generation of the f50, adidas is launching a new iteration that will forever mark the silo: the f50 adizero. Launched in 2010, this shoe is probably one of the most legendary in f50 history. Unveiled at the 2014 World Cup, it offered us a magnificent chameleon color, brilliantly worn by Lionel Messi, but it also marks the end of interchangeable crampons. This adizero f50 was also the first to be offered in two versions, one leather and one synthetic. 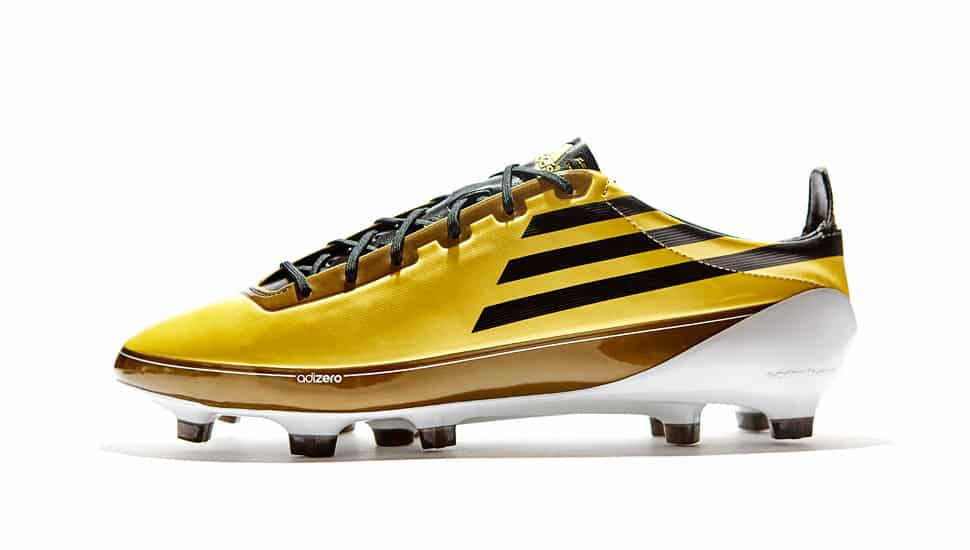 In 2011, adidas went even further in the evolution of the f50 range but still remained in its logic, lightening the shoe a little more to become the lightest ever worn. The f50 adizero Prime was born and will be revealed in many colors. 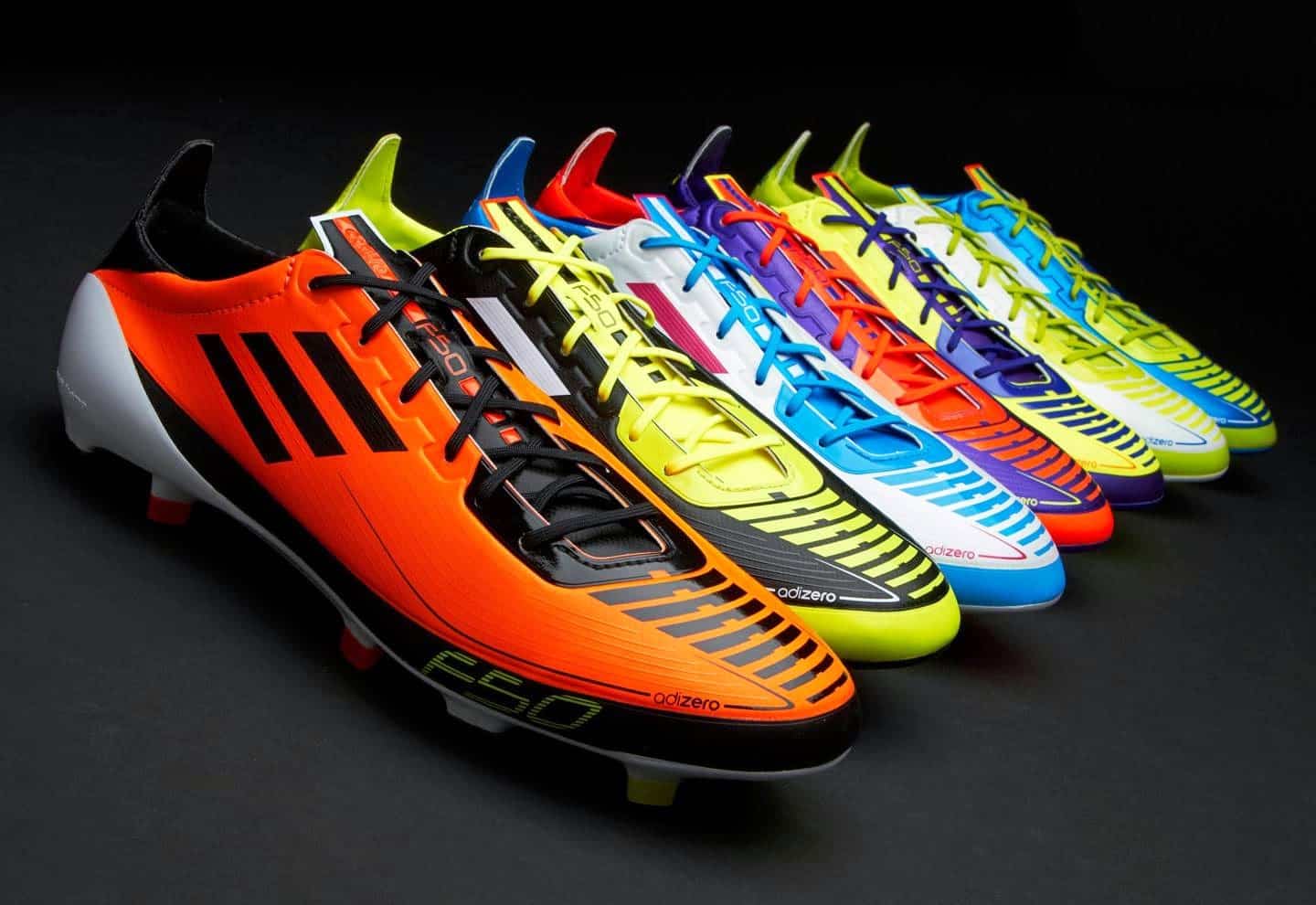 In 2011, adidas unveiled the second generation of the adizero f50. A model which remains in the continuity of the model of 2010 but which offers itself a slight visual facelift with the repositioning of the three bands of the German mark and the arrival of a different structure of the stem. It was during the existence of this f50 adizero II that Lionel Messi won his third Ballon d’Or. 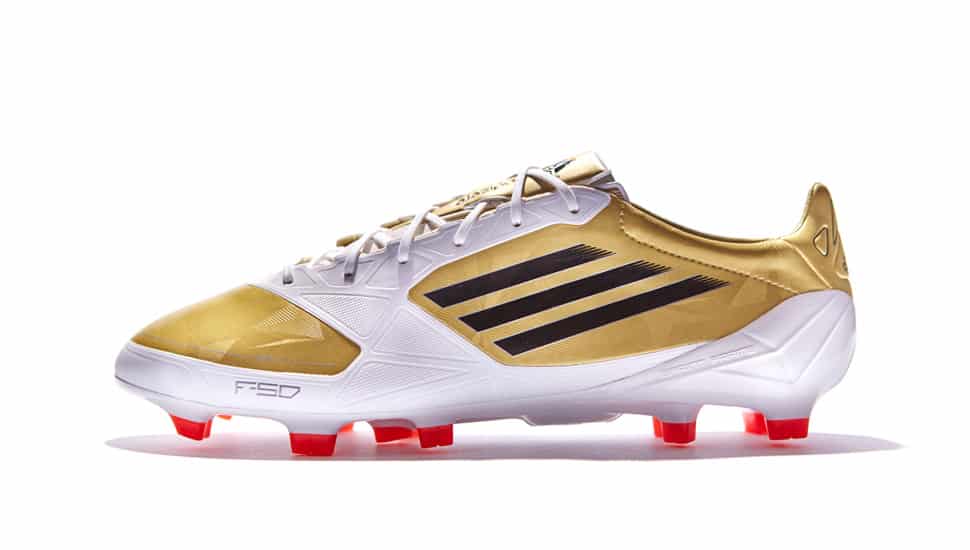 With the third generation of the adizero f50 presented in 2012, adidas did not have one but two world-class ambassadors. Lionel Messi who remains the number 1 ambassador of this silo since its launch and who will score 91 goals over a calendar year that year, but also Gareth Bale who terrorized the Premier League defenses and who will become one of the big names in the silos f50. 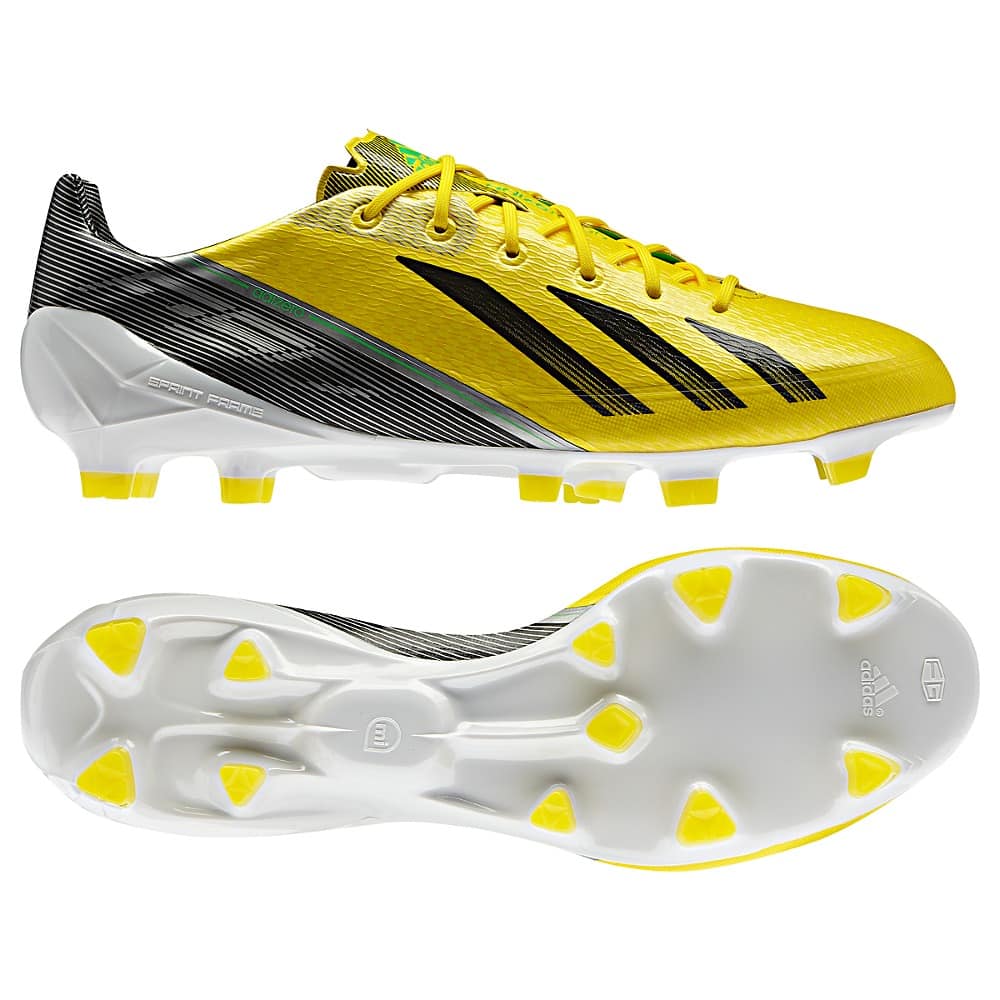 As before every major international competition, adidas unveils new technologies on its iconic models. Released shortly before the 2014 World Cup, the f50 adiZero Samba This is precisely a novelty since the upper is made of a hybrid material that acts like leather, offering all the advantages of synthetic. 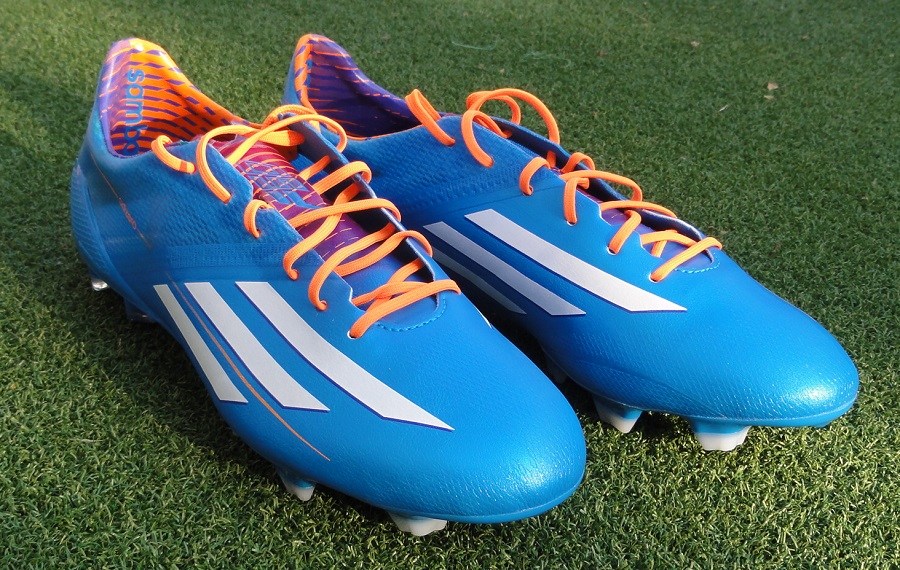 Also in 2014, adidas pushes the limits of lightness ever further by unveiling the f50 adiZero Crazilight. Worn by Gareth Bale, this model becomes the lightest on the market with its 135 grams on the scale, 15 less than the classic adizero f50. We will learn a few years later that this was just the beginning …

2015 is probably the biggest break in the history of the f50 silo. It is indeed when launching the fourth generation of this silo launched 11 years earlier that adidas unveils a new silhouette and far from the known codes of the f50. Even if the pair retains the iconic DNA of the f50, still offering that feeling of lightness and better ball touch, the visual denotes compared to previous versions. A year later, we will discover the X range which will replace the f50 and it is impossible not to cross the two models and to think that the fourth and last generation of the legendary f50 adizero was ultimately only a merger with the X …

After the success of the first f50 Crazylight, adidas goes even further and offers a second color and above all a version lighter than ever, since the adizero Crazylight II f50 weighs only 99 grams! The barrier of less than 100g is crossed and adidas has then the lightest shoe in the history of soccer cleats. 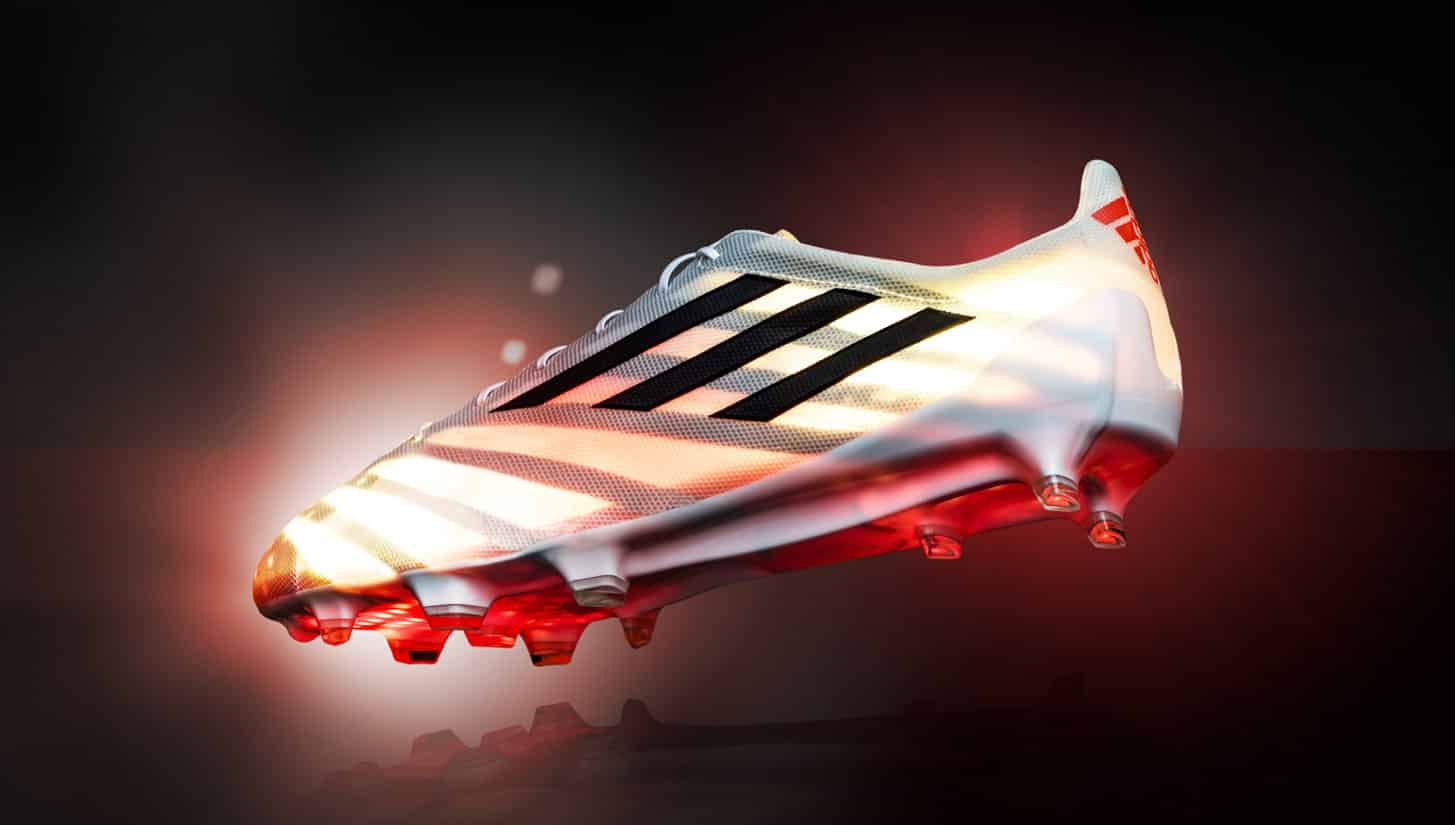 After 11 years of loyal service, trophies and goals, the f50 is abruptly replaced when the new adidas football strategy is implemented. Outside the Predator, the f50, the Nitrocharge and the adipure to accommodate the Ace and the X. To embody the notion of speed as the f50 did, the German brand unveils the X range which is still in place today. An obviously strategic choice and which seems to have borne fruit since the X is the most worn model at adidas, but which still leaves many footballers orphaned today.

In 2015, adidas therefore leaves aside the Predator and the F50 and gives birth to two new silos, the Ace and the X. The X which then becomes the speed shoe for the German brand is made of synthetic and has a small sock that rises jute below the ankle. 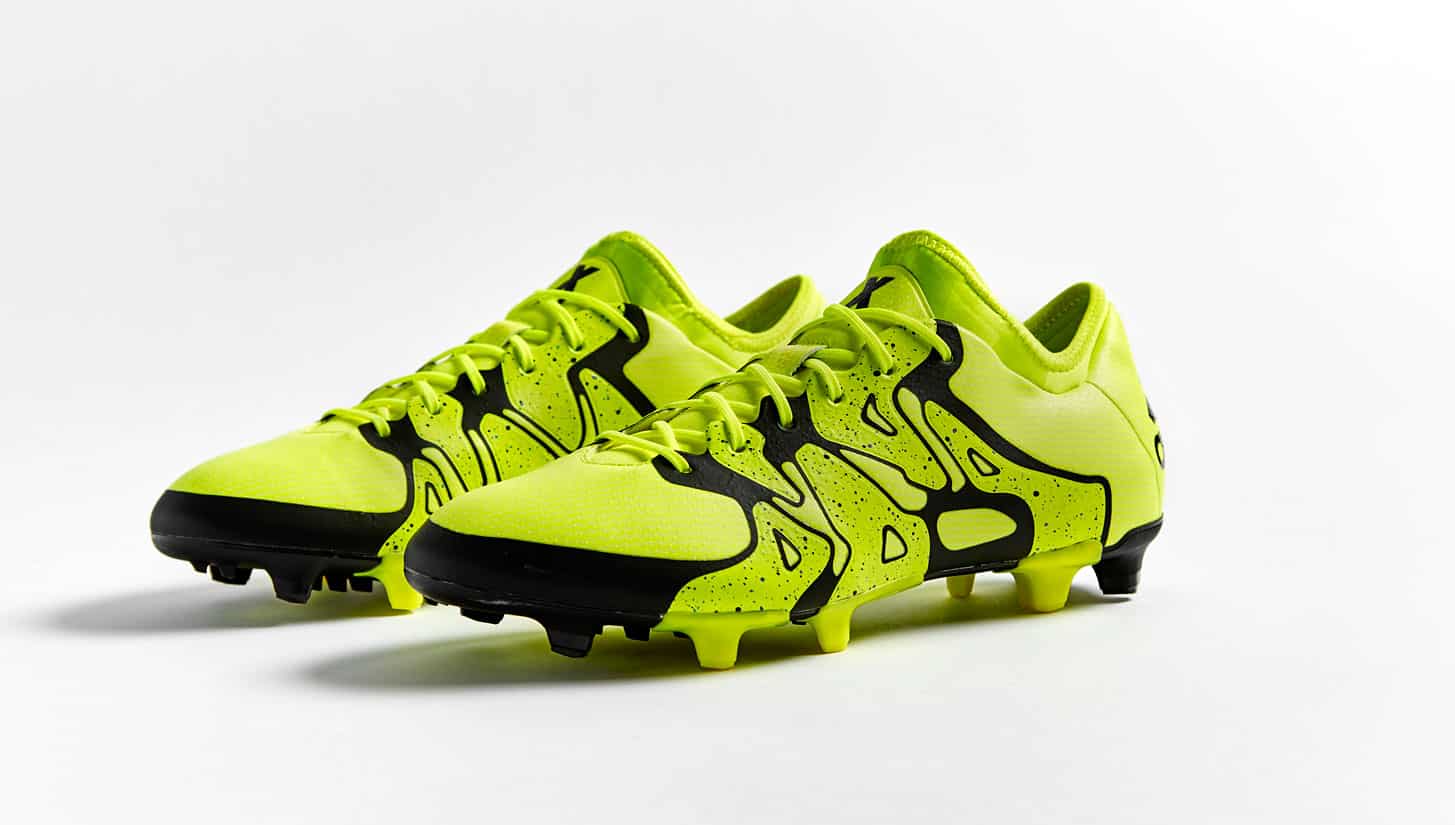 Like the creation of the f50 range, the X 16+ Purechaos remains forever as a true revolution at adidas. Using a technical and soft material inside the shoe as well as a synthetic material on the upper, this pair hides the laces, just like in the early hours of the f50. The DNA of the historic silo is still present and adidas is not hiding it.

Seeing the success of the X16 +, adidas changed very little about the X17. Almost nothing from an aesthetic point of view and only a few technical improvements. For a shoe that remains one of the best on the market at this time. 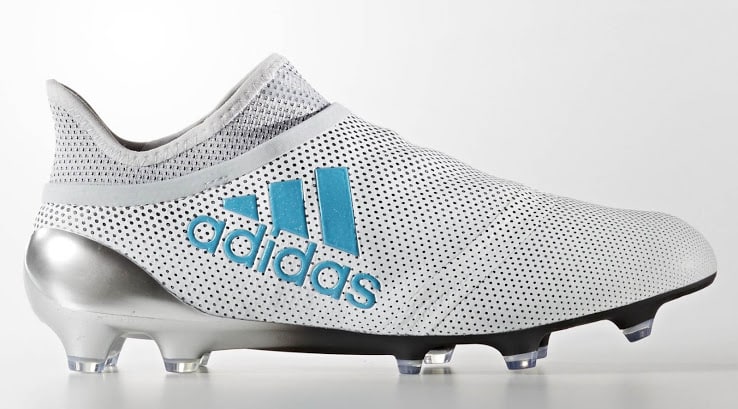 Just before the World Cup (we do not change good habits), adidas unveils a new version of its X range with the X18. Always imagined in a version with and without laces, the X18 stands out with a silhouette that takes up the codes of… the f50! A much more aggressive look, bands positioned differently. It’s hard not to find traces of the f50 on this new generation.

A year later, adidas launched the X19, a model which does not change technologically but which receives a very slight facelift. 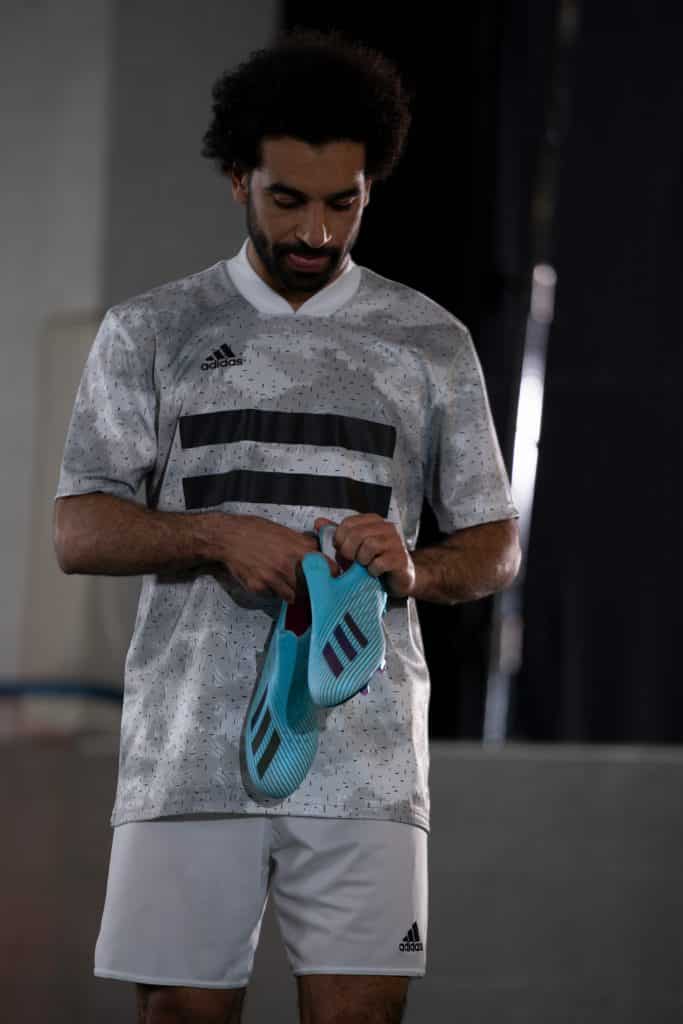 In August 2020, adidas unveils the new version of its X range, the X Ghosted! A model that wants to push the limits of speed and which is even more present in the great history of the f50. With its MirageSkin stem and transparent effect, it’s hard not to think of the f50.8 …