Discover the evolution and history of the Nike Mercurial over time. The history of this shoe began in 1996, after the partnership between the Brazil team and Nike.

To stick with the capacities of the time of Ronaldo (speed, dribbling, acceleration), Nike and its designers launched several concepts following tests. In 1998, the Nike Mercurial was born, 20 years later the saga still continues and the Mercurial has established itself over the years as the most worn football shoe on professional grounds. From Brazilian Ronaldo yesterday to Cristiano Ronaldo today who embodies the values ​​of this pair, it is legendary players who have helped to build the great history of this extraordinary model. Like the Predator at adidas, the Mercurial has become Nike’s iconic pair over the years. A look back at the great history of the now legendary attacking shoe: Nike Mercurial. 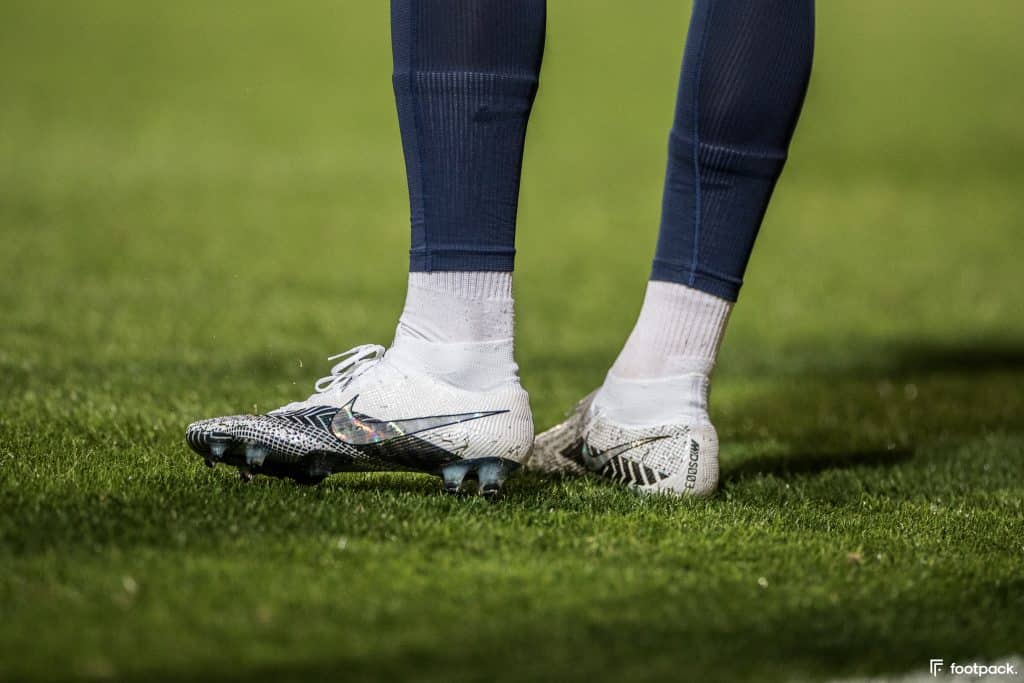 Which players wear and have worn the Mercurial?

Players who have worn the Nike Mercurial:

What are the different ranges of the Nike Mercurial called?

The history and evolution of the Nike Mercurial since 1998

In accordance with the ideas and the game practiced by Ronaldo, the Nike Mercurial was designed for speed. This shoe was the first to use a synthetic upper, the KNG-100, this revolutionized ideas on the development of a football boot. This first shoe was in the colors of Brazil and was worn during the World Cup in France in 1998. 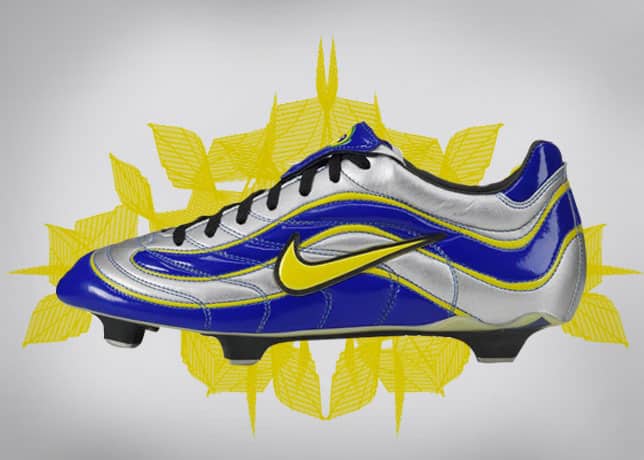 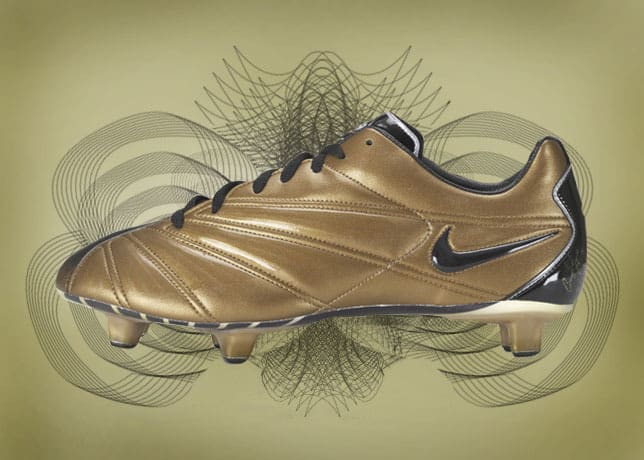 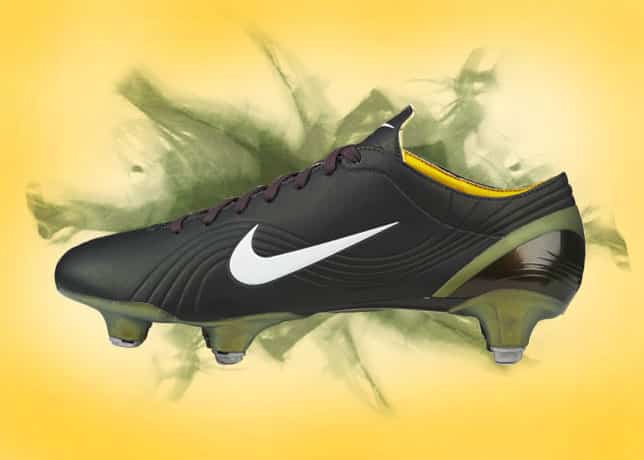 For the Nike Mercurial Vapor II, the weight is the same as the previous version. On the other hand, improvements in comfort have been made and in particular in the heel on this model.

This gold model was designed for Ronaldo. Several years later, Nike repeated the operation with Neymar for his Hypervenom. This model is also the first worn by Cristiano Ronaldo, who was then a rising star of European football. 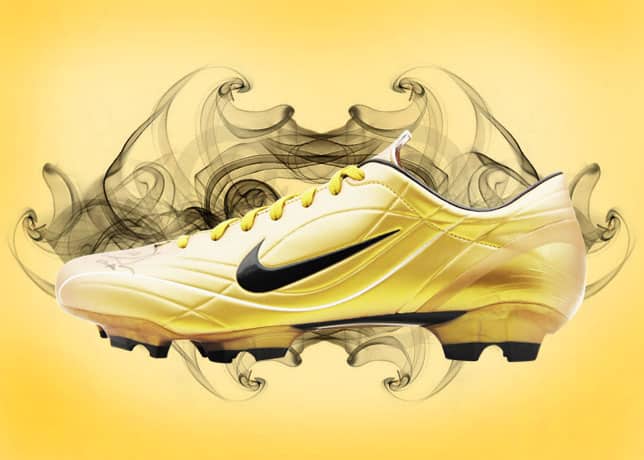 The Nike Mercurial Vapor III has undergone significant changes in technology. On the upper part, a “Teijin” microfiber has been designed to adapt to the shape of the foot. The heel has also evolved with the integration of carbon fiber.

This shoe was worn by Brazilian Ronaldo during the 2006 World Cup, where he broke the record for the number of goals in the competition with 15 goals. 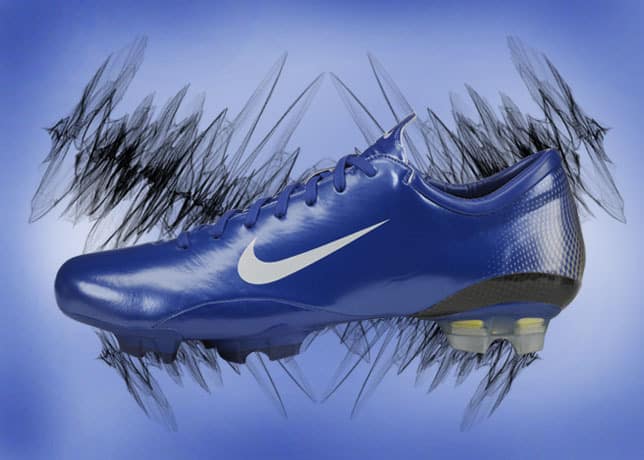 When Mark Parker becomes CEO of Nike in January 2006, he challenged all Nike teams to imagine a limitless model of the Nike Mercurial.

The Nike Mercurial Vapor SL responds to this challenge. With only 185 grams on the counter, the shoe has been made entirely of carbon fiber. This shoe launches a new era of innovation in soccer shoes. 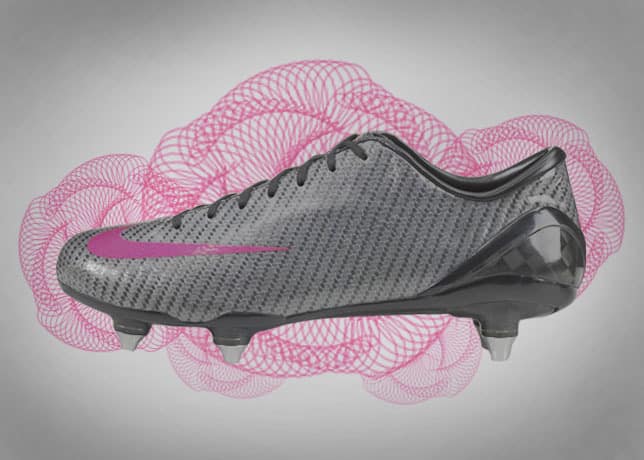 The Nike Mercurial Vapor IV took over from the Mercurial SL. The “Teijin” microfiber is present over the entire upper part of the shoe, even covering the laces.

An aesthetic evolution that hides a technological innovation. Indeed, the internal frame is made of fiberglass. 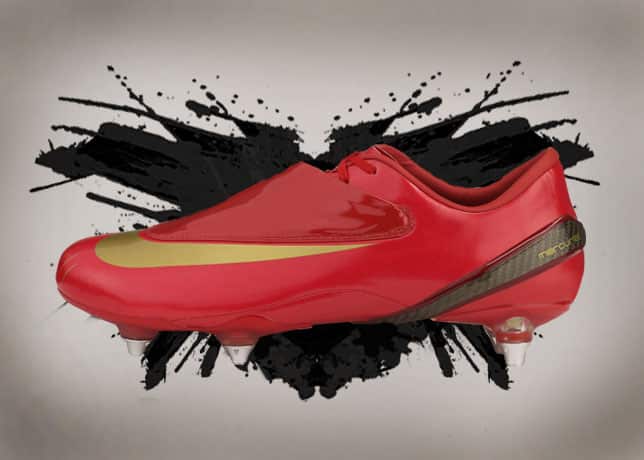 The Nike Mercurial Superfly is undergoing new developments to make it the unmatched speed shoe on the market.

Like the Mercurial SL before her, the Nike Mercurial Superfly has advanced crampons. The Superfly is made up of new technological developments: 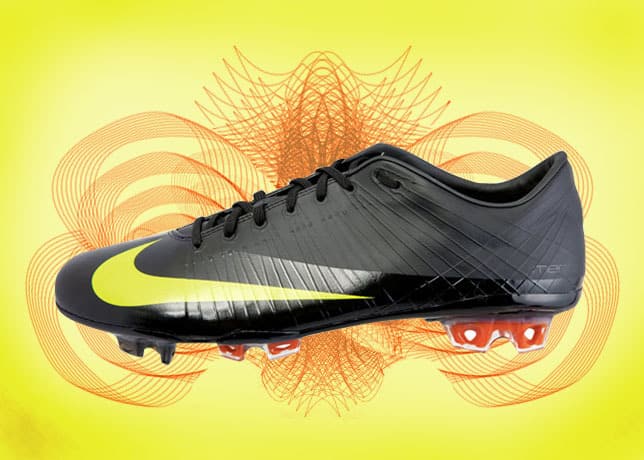 Inspired by the cheetah, the Nike Mercurial Superfly II includes new technology: Nike SENSE. This is the great evolution of Nike for his speed shoe.

This model of the Nike Mercurial Superfly II was worn in South Africa by Cristiano Ronaldo in particular. It also experienced a drop in weight, again thanks to the use of a carbon fiber plate.

This model has known a reissue in 2014. It was worn by Cristiano Ronaldo in the Champions League final. 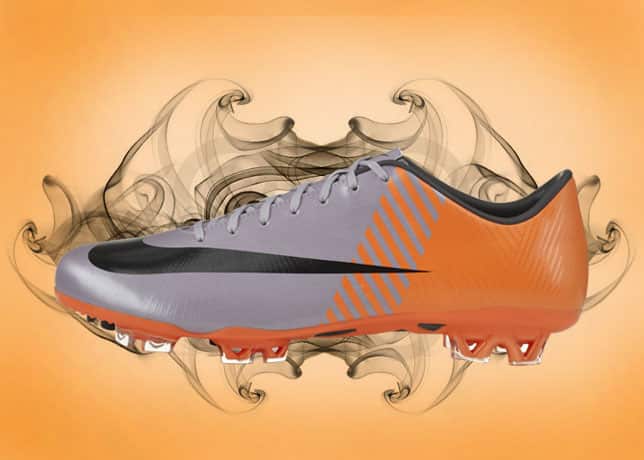 The 3rd generation of Nike Mercurial Superfly aims to strengthen grip on all types of terrain. The crampons reduce the risk of slipping. The sipes also help keep more stability when changing direction on the ground. 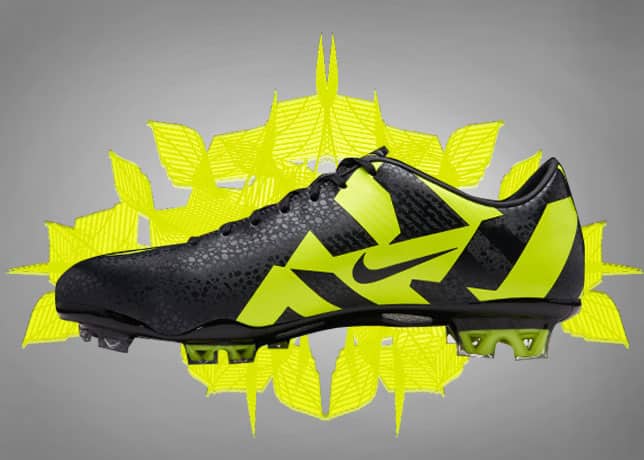 The eighth edition of the Nike Mercurial Vapor unveils a new crampon system. Innovations on the upper have also been revealed: the tip of the shoe is thinner and significantly changes the design of the shoe. Mercurial. The “Teijin” microfiber is also improved and gives a barefoot feeling.

As with every evolution of the upper part, the sole has also been revised: it is now in flexible fiberglass. The heel is also more flexible. 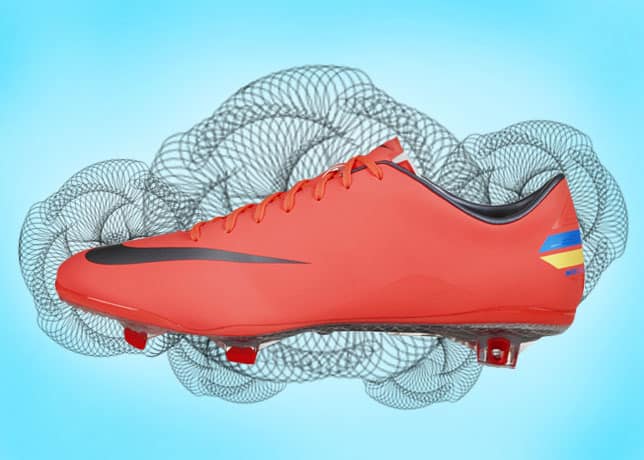 The 9th edition of the Nike Mercurial Vapor is all about complete control. The upper is a combination of all control conditions (ACC), for a consistent feel in wet or dry conditions.

Editing CR7 Mercurial Vapor IX by Cristiano Ronaldo gave pride of place to fluorescent colors adorning a new textured upper, itself decorated in a safari livery. But it was not yet enough: la CR7 Mercurial Vapor Supernova, with its Supernova motif further emphasized the explosiveness of the speed of the Mercurial range. 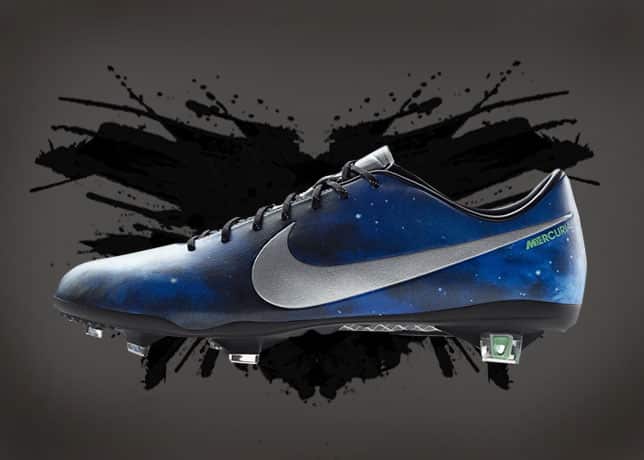 It is also called the “slingshot of the foot”. Born after many years of R&D in the Nike Sport Research Lab, the Superfly IV was created for players who are always one step ahead of their opponents and who take football forward.

This shoe has benefited from technology Flyknit by Nike, unveiled for the first time at the road and track events in London. Based on a new three-mesh weave, the upper of the Mercurial Superfly IV Reduces the amount of material used between the foot and the ball for better ball touch, which is essential when playing at high speeds. The mid-high Dynamic Fit collar not only transformed the silhouette of the Mercurial, but it helped improve the connection between the player and his shoe.

Extending the foot so that it is integrated with the natural movements of the body is an integral part of the innovative nature of the Superfly IV. 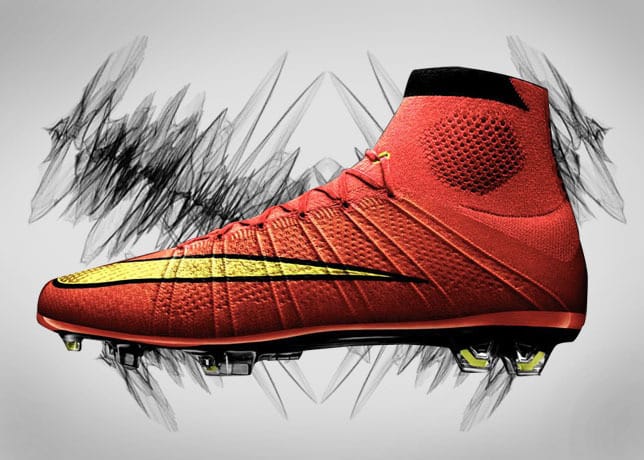 Declination of Mercurial Superfly IV in low version, the Mercurial Vapor X is not made of Flyknit and opts for the old technology « Teijin ». We find, on the other hand, the cables Flywire, more discreet than on the Superfly IV, ACC technology (All Conditions Control) and exactly the same outsole as the Superfly IV. Many players like Zlatan Ibrahimovic or Eden Hazard have preferred this model to Superfly IV. 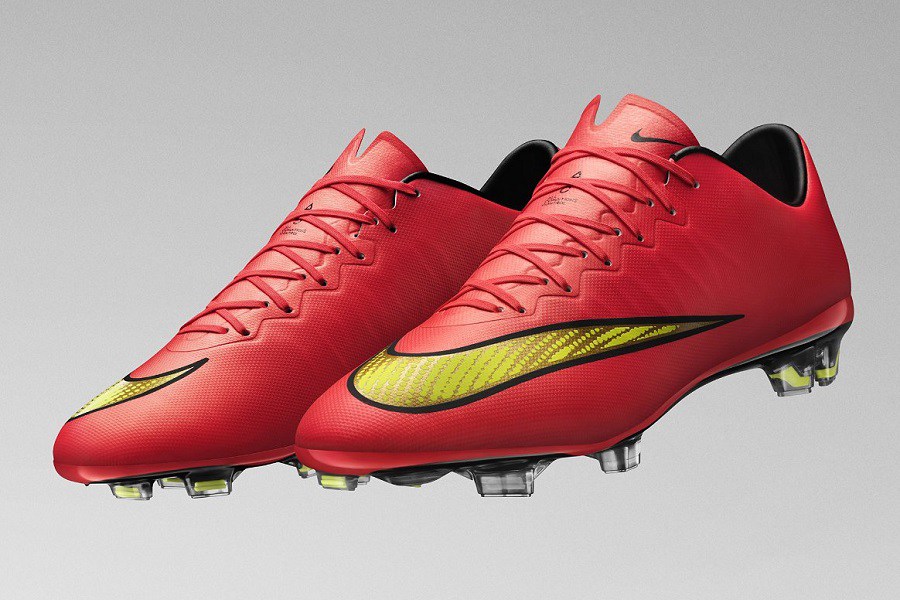 Inspired by Formula 1 cars, the Mercurial Superfly V will make its appearance on May 28. Still featuring a Flyknit upper and collar Dynamic Fit, its main changes concern its outsole since it has been aligned according to the natural contours of the foot to eliminate the gap that previously existed under the feet. This new anatomical sole is 40% lighter than the previous one. Nike also revised the traction system of the Mercurial to further optimize speed. As in 2014, the Mercurial Superfly was available in a low version with the Mercurial Vapor XI model, which has the same characteristics as the Mercurial V, except for its synthetic upper and its integrated tongue. 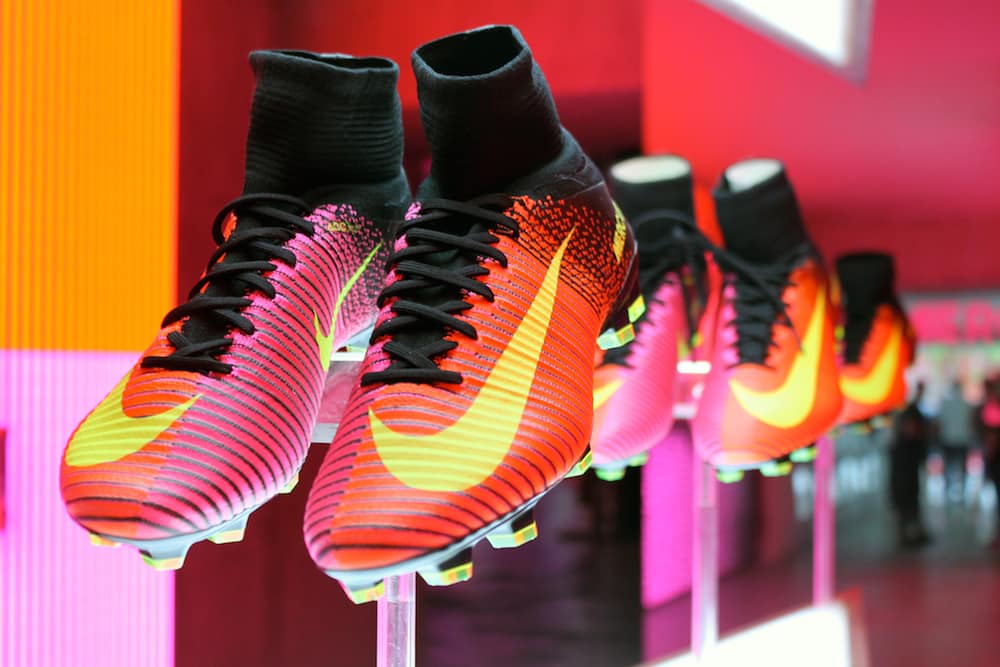 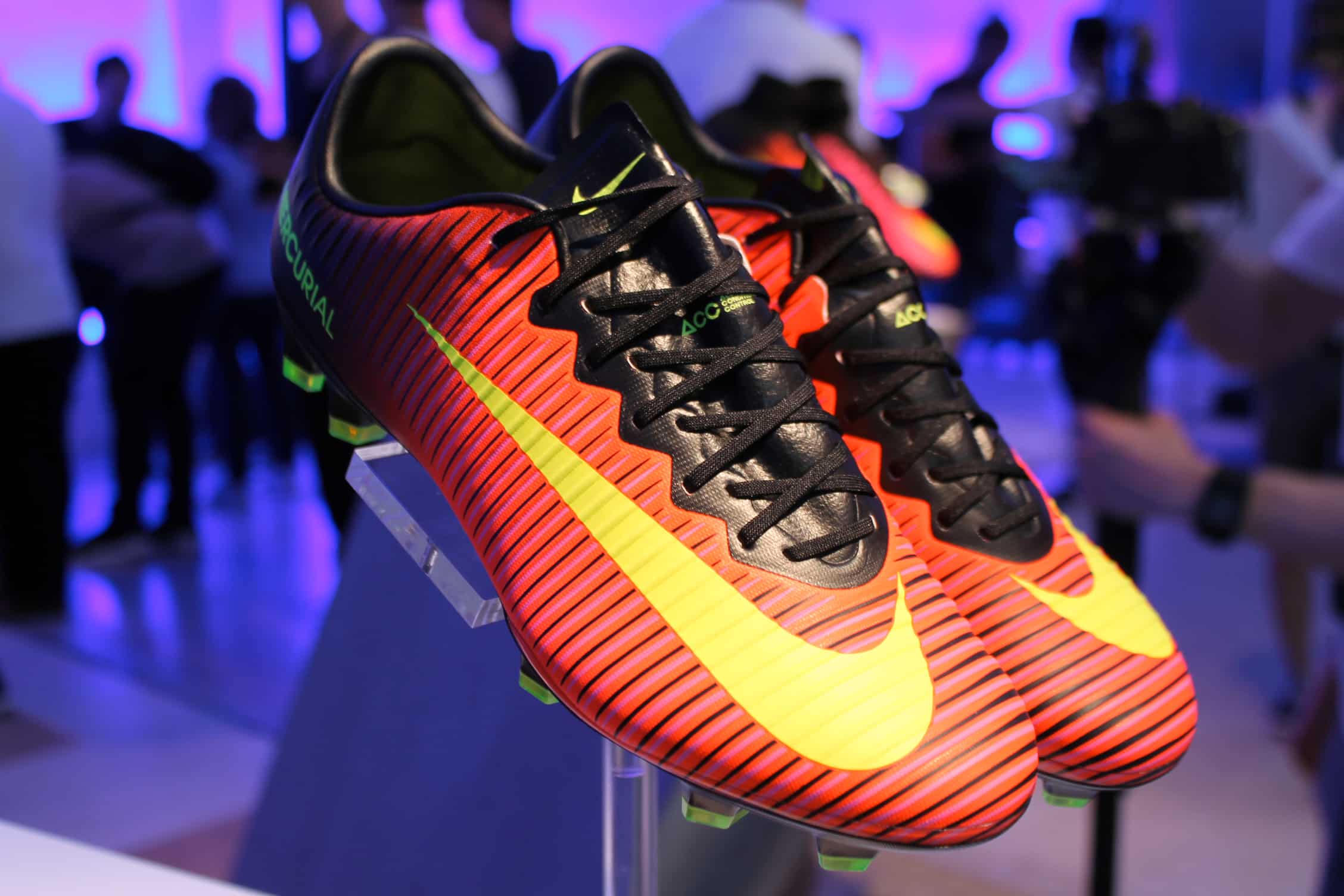 Launched on September 7, 2017 and sold-out in a few minutes, the Mercurial Vapor Flyknit Ultra is a new version of the Mercurial Vapor since it sports Flyknit technology for the first time. This Flyknit, a one-piece stitched mesh part, which could be seen on the Dynamic Fit of the Superfly IV and V versions, is now available on the low version of the Mercurial. We therefore find a small integrated mesh sock that extends from the ankle to the instep. Eden Hazard has been chosen as the model’s main ambassador 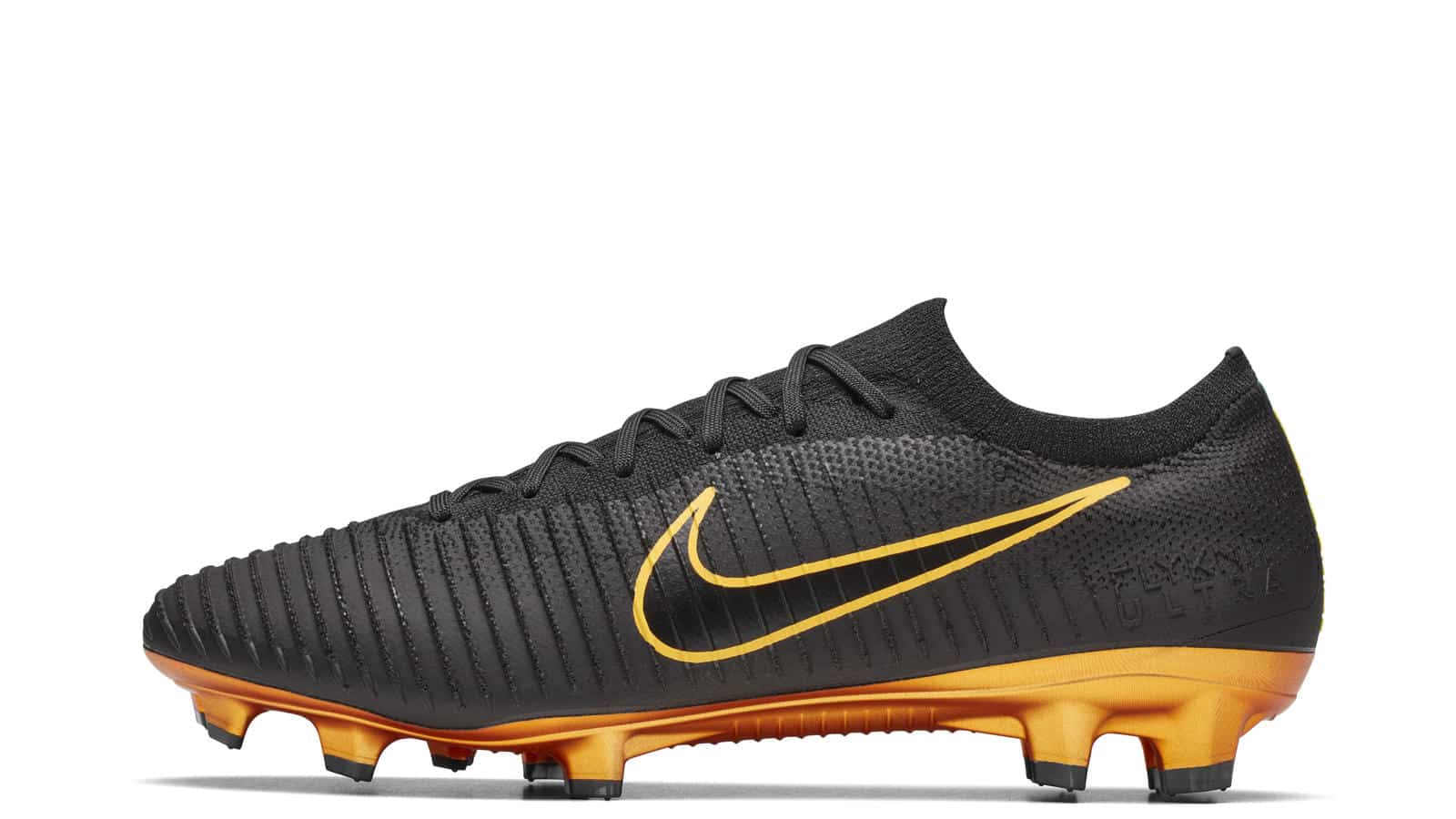 Launched at the start of 2018, the Mercurial Vapor and Superfly have once again made their revolution, a revolution around a key word, the “fit” (understand maintenance). And to push precisely this “fit” to the extreme, the American manufacturer has simply integrated a 360 ° Flyknit construction, from the top of the vamp to the arch of the foot in order to provide an unparalleled sensation. 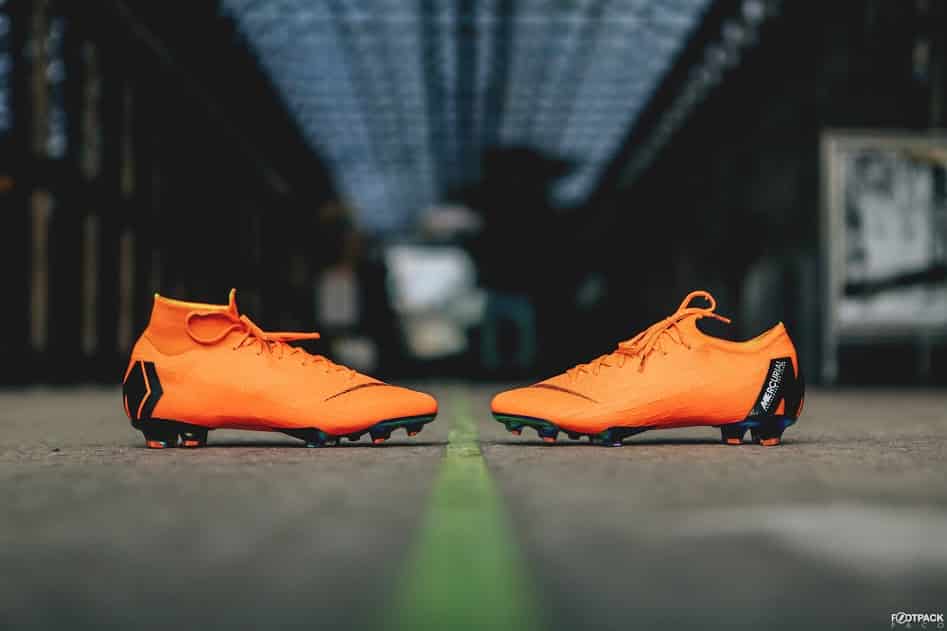 Unveiled the day before the Women’s World Cup final, this version of the Mercurial reuses the same base as the previous one, namely a 360 ° Flyknit construction as well as a sole separated in two. In addition to a slightly different appearance, it still features some evolutions making the pair more resistant, more comfortable and lighter. 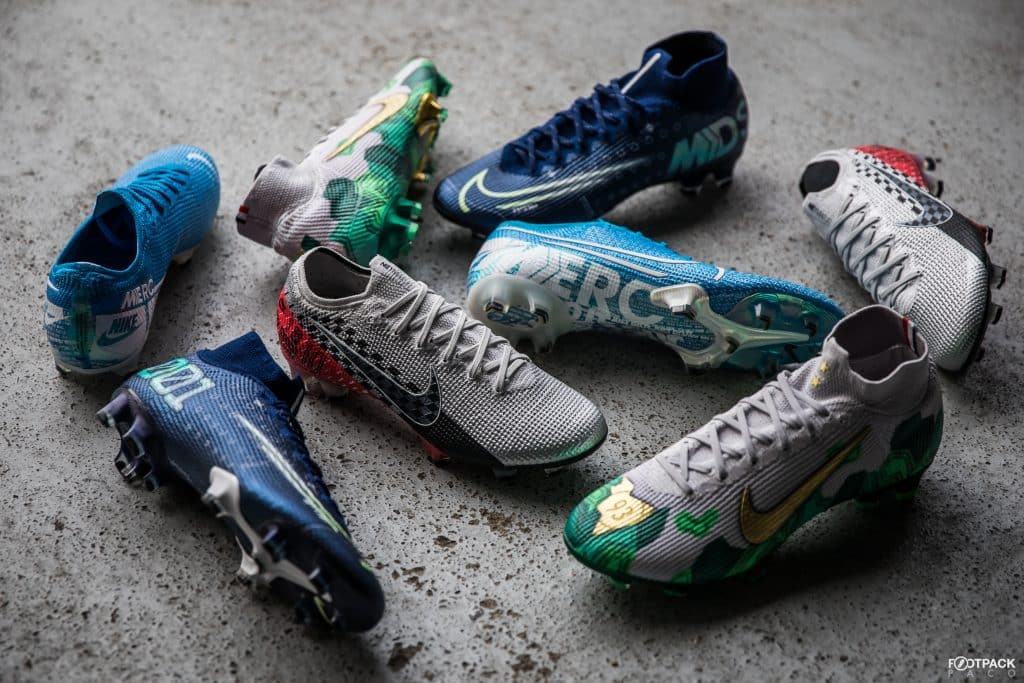