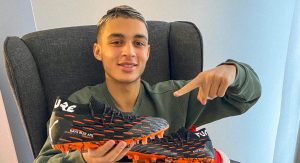 Great hope of PSG, Kays Ruiz-Atil seems to decide to follow in Neymar’s footsteps to one day confirm this immense potential. In the meantime, the native of Lyon signs with Puma … the same supplier as Neymar.

The weeks go by and the strategy of Puma Football continues to bear fruit. Whatever the championship, whatever the status of the players, Puma crampons seem to be flooding the market lately. Obviously, the phenomenon is not new and it goes back a few months already, but it is impossible not to associate the signature of Neymar as the starting point of an acceleration of the arrival of new faces. In recent days, Willian, Varane, Lewandowski, Xhaka, Pépé, Ederson Moraes, Çalhanoglu have been seen with crampons from the German brand! A rather incredible list of names that proves that the Ultra and the Future are now overshadowing adidas and Nike.

By offering itself the services of Neymar as ambassador number 1, Puma obviously achieved a huge marketing coup but also immediately gave credibility to its crampons offer in the eyes of all. When one of the best players in the world changes brands and wears new studs, it inevitably changes the look of other players in the locker room. To go in this direction, another PSG player has just signed up with Puma. No, it’s not about Mbappé, Di Maria or Verratti, but Kays Ruiz-Atil, the young 18-year-old midfielder who worked for OL and FC Barcelona. If this may seem trivial as a “rookie”, it is nevertheless interesting to remember the career of the young Franco-Moroccan, since in addition to his status of football hope, he was also and especially associated with adidas since he was 12 years !

Under contract with adidas since he was 12 years old!

Still pampered by adidas a year ago since the brand with the three stripes regularly sets up “adidas Scouting Camps” with the aim of preparing young athletes for the different facets of modern sport (media, social networks, contract, etc.) , Kays Ruiz-Atil now joins Puma and therefore becomes the third player in the Parisian professional workforce to wear the leaping feline crampons after Neymar of course, but also Abdou Diallo. Already seen a few days ago with the same prototype as the one worn by the Brazilian for several weeks, the former resident of the Masia switches from the Nemeziz of adidas to the Future 6.1 at Puma. An obviously coherent choice since the two models are designed with notions of agility or skills.

Admittedly, the arrival of Kays Ruiz-Atil will not revolutionize Puma’s marketing strategy, but the recruitment of an 18-year-old player by the German brand proves once again that the market is changing. If we look at the figures in our infographic of Ligue 1 crampons at the start of the 2020-2021 season, Puma was very far from its overall average in the 17-21 sector. In difficulty in this age bracket and unlike other groups, the German brand now seems determined to catch up and bet on the future. All that’s left to Kays Ruiz-Atil is to integrate the first team on a long-term basis.