Fears of relegation to European dreams

When someone like Pep Guardiola praises the opponent wholeheartedly, it’s usually SO good. After Southampton’s recent exciting game against Pep’s men, whom they narrowly lost 1-0, the Sky Blues coach was asked how impressed he was with Ralph and his team.

“They are so, so good,” Pep Guardiola said.

So much is his volume of success with the Saints that it recently emerged that Manchester United owners The Glazers are preparing to bring in Ralph as a possible replacement for Ole Gunnar Solskjaer at the end of this season.

In stark contrast to the current scenario at St. Mary’s, exactly 13 months ago, Ralph Hasenhuttl’s men had been beaten 9-0 at home by Leicester and were in the relegation zone. Fast forward to nearly a year and the Saints are challenging European venues and reaping the rewards for sticking with the Austrian tactic.

Now I’m not getting ahead of myself or anything … but if you compare Ralph’s Leipzig team and his current #SaintsFC team can see a number of similarities across the team and configure as a whole.

You are really building something special here. We are very lucky. #Hasenhuttl 👑 pic.twitter.com/sPnuxjlBFE

After that humiliation against Leicester, the next thing that took place between the Saints head coach and CEO Martin Semmens was a long talk about the club’s vision. The lengthy talk did not include about the coach’s future, but rather how much responsibility Hasenhuttl was carrying out on his own and how he needed that extra support to execute his vision for the club.

Steffan Galm, with whom the former RB Leipzig manager worked in his early days as a manager, said that “his football is about strength and power, team spirit and, at first, not tactical. The most important thing was to form a team, to have courage, courage and fun ”.

So how did Ralph Hasenhuttl turn an inconsistent team from relegation favorite to European contender in the space of 13 months?

NO MORE A CLUB FEEDER?

In the last decade, the Saints have been a feeder club of all kinds; be it an exit from management or a key player leaving St. Mary’s.

Starting with the coaches, Mauricio Pochettino was caught by Tottenham Hotspur just as the club and fans began to believe that the future is bright.

Ronald Koeman replaced the Argentine and achieved the best result of a season for the Saints, only for the Dutch coach to be hired by the Everton club of Merseyside.

🗣 “What was lacking a bit today was the quality in the last third.”

The boss offers his assessment of today’s game:

Speaking to Stadium Astro, former Norwegian international Claus Lundekvam said: “I’m sure there will be great teams looking at Ralph without a doubt. What he has done with Southampton is quite incredible.

“If you look at Southampton in the last five or six years, they have been a feeding team.

“They lost [Mauricio] Pochettino and [Gareth] Bale Tottenham, they just took [Pierre-Emile] Hojbjerg this season and it has been a revelation.

“But they believe in Hasenhuttl and the project they are building.

“Can you keep it? I do not know. You look at the Big Six teams and some of them need a coach like him. “

In the last third of the court, players like Sadio Mane, Dusan Tadic, Rickie Lambert and Jay Rodriguez were sold and each of them was a match winner at some point for the South Coast club.

RALPH BACK TO BASICS

During that beating against Leicester, the Austrian coach played with full-backs, as he had done for most of the season.

This was in contrast to the 4-2-2-2 formation he was popular for and had been using since the beginning of his coaching career, with the youth at SpVgg Unterhaching, a third division club in Germany, 13 years ago.

There is no reward but an animated display 👊

The best of images of #SaintsFCis the defeat of #City man:

The notable difference from the traditional 4-4-2 is that wingers tend to operate in and around the lines between the opposition’s wings rather than stay tall and open, especially while dominating possession. This allows the Saints sidelines to make those marauder overlays and crowd the penalty area with ease.

In other words, Hasenhuttl reverted to the tactic that was the basis of his success in his early days in Ingolstadt and RB Leipzig and that made fans on the south coast feel confident when he arrived at St Mary’s.

With enough time to put his ideas into practice during the running of the bulls, the Austrian began to build his project that fans call “Ralphampton.”

Walker-Peters and Walcott were the only summer signings in the starting lineup against Manchester City and that only suggests the work Hasenhuttl has done with the resources already at his disposal, who arguably looked weaker after the summer sale. by Pierre-Emile Hojbjerg when we have the information. 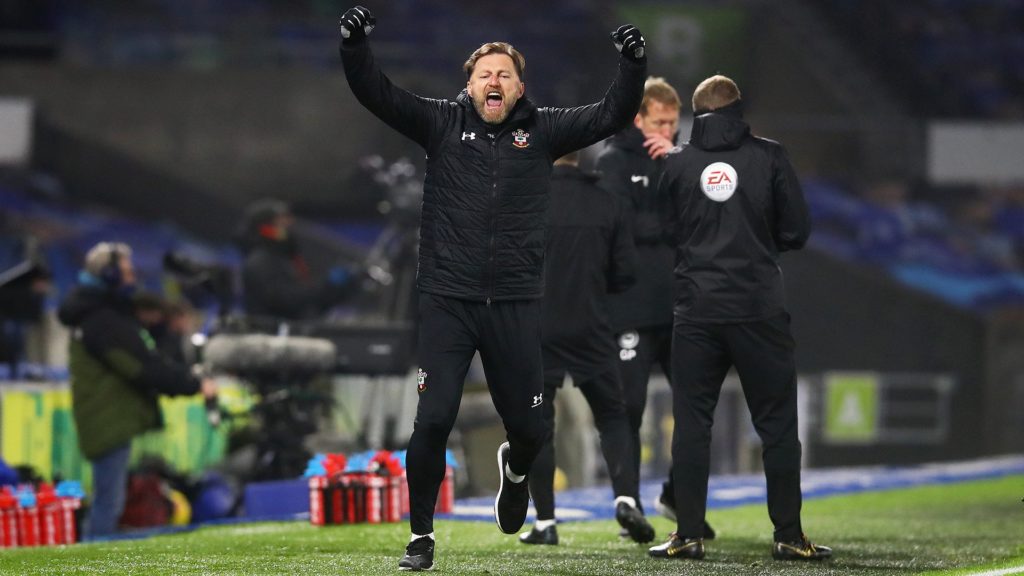 Before Austrain came to St Mary’s, a large part of their transfer budget was invested in players who are not even at the club at the moment. He inherited relatively little and turned it into a lot.

He was named after a series of disappointing managerial helmets and signings from a club that operates without an owner that financing cannot afford, which included £ 19 million on Argentine forward Guido Carrillo (joined Elche for free for two and a half years then); £ 18.1 million to midfielder Mario Lemina (now on loan at Fulham); and £ 15 million to Dutch defender Wesley Hoedt (on loan to Celta de Vigo 18 months later).

Brighton midfielder Pascal Gross, who was in Ingolstadt when Ralph Hasenhuttl was in charge, described the impact the former RB Leipzig manager had on him and his teammates.

“From week one, no matter what team it was, we trained and played with the same style: really aggressive, trying to push and force mistakes, then fast balls to the forwards when the defense is not organized to have some chances.” he said.

A chance to shine 💫

“We press to win the ball up high, 20, 30, 40 meters in front of the opponent’s goal. So you only need one pass to have a chance. It was really successful. “
Adam Leitch, a former spokesman for the Southern Daily Echo in Southampton for 18 years, a stint that featured 16 different coaches was taken by surprise by the coach’s no-nonsense approach.

“He spoke with incredible conviction and authority,” Leitch said. “He was not coming to stabilize the ship, he was coming to revolutionize.”

“From day one, a no-nonsense, no-excuses culture was instilled on the training ground,” Leitch said.

GET THE BEST OF YOUR PLAYERS

While the Saints’ performance levels have indicated otherwise, some of their players may not be as good individually; not without Hasenhuttl anyway.

Danny Ings’ staggering 27 goal return in his last 43 games has propelled his team to compete with the elite of the leagues, but it should be noted that even a player of his caliber has produced the best form of his career with Hasenhuttl. While not alone in that category, the rejuvenated Theo Walcott is performing much better than he has for years.

Even his colleagues like James Ward-Prowse, now the division’s best free-thrower according to Pep Guardiola, was the Saints’ 19th player on a trip to Huddersfield two years ago; he is now the captain of the club. An average player like Oriol Romeu has reinvented himself as the best destroyer in the league in the middle of the park.

How good is it @ JVestergaard7 Have you been on a 1️⃣-🔟 scale so far this season? 🔥 pic.twitter.com/kaRF7cD7Q1

Che Adams was a forward who did not score in his first 25 Premier League games, he has now formed a lethal attacking partnership with Ings with eight goals in his last 19 games.

Jannik Vestergaard has been the towering center-back the Saints have been missing since the days of Virgil Van Digk, whose set-piece threat and range of long passes have recently been compared to the Danish powerhouse.

Jose Mourinho was happy to let go of the Spurs’ Kyle Walker-Peters, who thought he wasn’t good enough to play at this level.

KEEPING THIS MOMENT IS KEY TO RALPH HASENHUTTL AND HIS MEN

Hasenhuttl’s innate German football philosophy, the energetic and progressive brand of football are what many big clubs are looking for these days. The Saints can hope that Borussia Dortmund, who recently pulled the trigger on Lucien Favre, haven’t realized just how far their Austrian tactician has instigated a resurgence.

Because this is something you get when you are patient with yourself and how you can make a difference in management. And Pep Guardiola would probably agree with that.
Hasenhuttl’s direct focus shook a stick that was floating aimlessly at the bottom of the table not too long ago.

But Hasenhuttl didn’t have the gamer profile to implement his philosophy the way he wanted. Before the Leicester beating, Southampton won successive games only twice in 10 months after that initial debacle.

Today we gave absolutely everything. I felt we deserved more from the game with such a good performance. To the next one! #wemarchon pic.twitter.com/my8G4KRL7O

The former Southampton coach said: “You have to give Ralph credit.”

“If he had stayed behind, they would have fired him.

“A lot of managers would have said ‘I’m not going to change.’ The change. He changed the whole style of play from a defensive one to an attack one, pressing.

“Martin needs a pat on the back because he’s the one who clung to the coach when it would have been easy to say ‘we’re going to have a change,'” says Merrington. “Now the manager and the president are working hand in hand. If you have that, you have a chance. “

Whether the Austrian genius will end up taking his side in Europe is something that only time will tell.