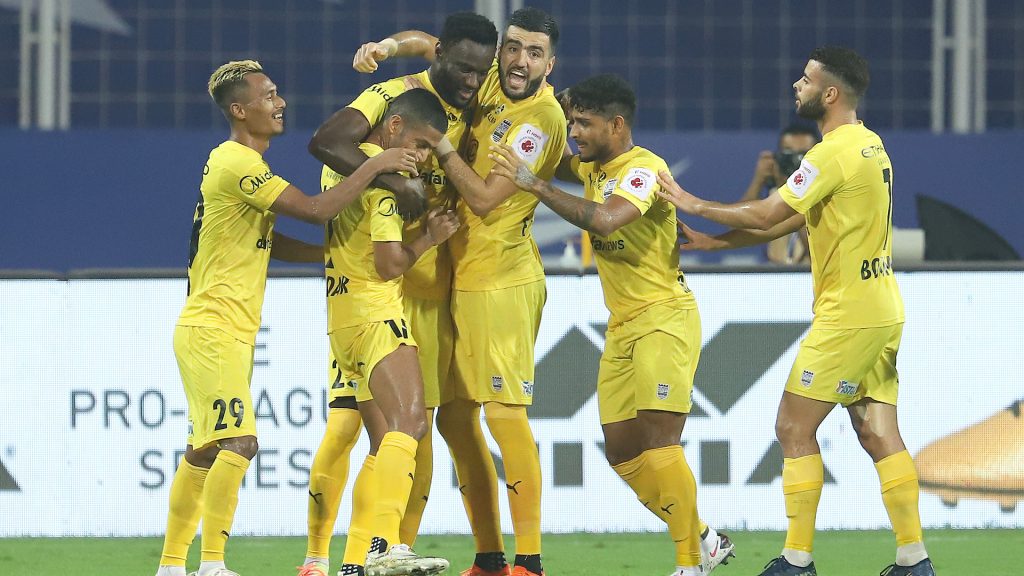 In the main clash of matchday 10 of the Indian Super League, fifth-placed Bengaluru FC faced second-placed Mumbai City. Carles Cuadrat’s team had lost their last two games and were eager to bounce back, but the Islanders were undefeated from matchday one and had only lost points once in that race so they wouldn’t be easy to convince.

A battle of epic proportions was set to begin, and this is what we did with it:

Bengaluru FC had a presentable opportunity in two minutes when Cleiton Silva slipped Deshorn Brown down the right after a small mistake by Ahmed Jahouh, but the Jamaican forward dodged their effort.

However, Mumbai City took the lead in the 9th minute, when Hernán Santana headed the ball in the face of the goal from a corner kick, leaving Mouinada Fall to turn home from close range.

Less than a minute later, Bipin Singh squared the ball to a free Adam le Fondre in the box after being found overtaken by Hugo Boumous on the left, but the forward had his shot deflected to a corner.

Mumbai City doubled their lead in the 15th minute when Mandar Rao Dessai sent a precise cross to Bipin Singh, who cushioned it with his first volley.

Bengaluru FC’s next notable opportunity came in the 41st minute, when Cleiton Silva launched a free kick from the edge of the area and cleared the wall, but his shot was parried by Amrinder Singh.

There was a big twist in history in the 77th minute, when Mouinada Fall apparently tackled Cleiton Silva cleanly in the box, but the referee awarded a penalty. Sunil Chhetri reached over to take it and broke it at home.

Mumbai came close to regaining their two-goal band in the 82nd minute when Bartholomew Ogbeche launched Ahmed Jahouh’s free kick with his head, but it went off the post. The Nigerian forward got his just reward two minutes later when he headed a corner kick to the right at Gurpreet Singh Sandhu, but the keeper fumbled as he hit the ground and entered.

Gurpreet is a saint. Not only does it help raise money to develop women’s sport in India, but it also helps correct mistakes in a soccer match. What a gentleman! 😀 #BFCMCFC

However, it was not all easy for the islanders, as Ahmed Jahouh saw a second yellow card in the 86th minute for a rather silly challenge, so they had to finish the match with one man less.

However, that didn’t matter in the outcome of this match, as Mumbai City managed a 3-1 victory.

Since Ashique Kuruniyan suffered that unfortunate facial injury, Bengaluru FC have not looked the same.

Tonight, they ran out of suspended Erik Paartalu, so Carles Cuadrat deployed Kristian Opseth and Deshorn Brown together for the first time this season instead of substituting one for the other as he usually does. However, the system he opted for, a 4-2-3-1, only accommodated one man up front, so Brown had to play on the right flank, and that didn’t work out very well.

After looking brilliant from the start of the game, the Blues conceded another set piece (for the third time this season) to undo their good work, and soon let another in after a terrible defense. After that, they seemed quite clueless as they neither pressed nor sat down, so they should have considered themselves lucky to only have two at halftime. They also received a penalty in the second half, but the home team also blew it thanks to a mistake by Gurpreet Singh Sandhu.

This was another disappointing loss for Bengaluru FC, and if things continue like this, Carles Cuadrat will surely find himself in a tight spot.

Mumbai City knew before the game that a win here would mean they would go into that big clash against ATK Mohun Bagan on a three-match winning streak, so that’s exactly what they wanted to do.

Although the islanders did not start very well and were close for the first few minutes, they recovered emphatically and raised two goals in 15 minutes for the second time in their last two games. They played one of the best possession football teams we’ve seen all season from then on, and their lead looked as intact as it could get at halftime.

There was another parallel to the Kerala Blasters game, as the Islanders’ intensity dropped in the second half and they didn’t look as silky as they did in the first period. However, their defense was solid, and barring a (incorrect) penalty decision, Amrinder Singh didn’t have much work to do in the match as he watched his team advance to another routine victory, especially after that well-deserved third goal.

Back where we belong!

Mumbai City took another three-point package from this match, which was surely the perfect way to prepare for next week’s big game. The only problem is that Ahmed Jahouh saw red, so he will be suspended for that match.

After getting off to a good start to the season, Mandar Rao Dessai missed the month-long action following an unfortunate personal loss and the mandatory quarantine that followed.

Tonight he was back in big business as he was absolutely directing the proceedings on the left flank. Deshorn Brown was in his pocket most of the time, and when he wasn’t, the Jamaican forward was trying (and failing) to track his runs down the flank. The winger also secured a well-deserved first assist of the season for Mumbai ‘s second goal with a perfectly beaten cross.

A bright full screen on the left.

Bengaluru FC remains in fifth position, while Mumbai City regains its place at the top of the table thanks to the first goals of the season by Mouinada Fall and Bipin Singh and a second by Bartholomew Ogbeche. The Blues have lost three straight games for the first time in ISL history despite Sunil Chhetri’s second penalty goal of the campaign. Ahmed Jahouh saw red for the second time this year, which was also ISL 7’s eighth ejection, but Sergio Lobera managed to beat Carles Cuadrat for the first time despite that.

Bengaluru FC will face SC East Bengal next Saturday, while Mumbai City will prepare for a big clash at the top against ATK Mohun Bagan on Monday.